For playing the game, each player places his ante on a marked spot on the table playing surface (“the layout”) where indicated; all ante wagers must be placed prior to the dealer announcing “No more bets”. Each player also has the option to participate in the progressive jackpot feature of the game. This is also done before the dealer announces “no more bets”, by dropping a chip in the slot on the table which activates the progressive jackpot light for that seat and that particular hand of play. Each player and the dealer will then receive five cards, face down. The dealer will turn over one of his cards, then push the cards toward the players, after which the players may look at their cards. They may only look at their own cards, and may not discuss what they have with any other players at the table.

Players have the option to either play or fold. Any player choosing to play places his raise into the box in front of him marked Bet. Any player who chooses to fold forfeits his ante. After all the players have made their decisions, the dealer reveals his four hole cards. The dealer only plays if his hand either contains both an ace and a king or forms a pair or any higher-ranked poker hand. The dealer then compares his five-card hand to those of the other players, individually, starting with the player farthest to his right, and both the ante and the raise bets of all players whose hands beat the dealer’s qualified hand win. If they do not beat the dealer’s hand, they lose both the ante and the raise wager. If a player ties with the dealer, both ante and raise bets push. If the dealer’s hand does not qualify, the ante bets of players get paid even money while the respective raise bets all push. 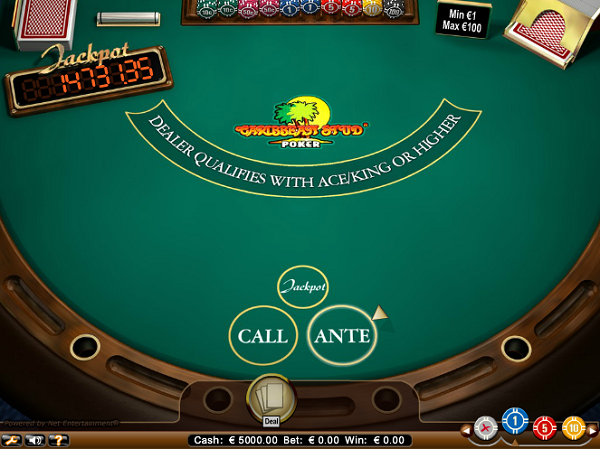 The Caribbean poker game has some major rules that must be observed at all time while playing. The first rule is that there can only be one hand per player . Players cannot hold or wager on multiple hands at the table. The second major rule; Players choosing to play the Progressive Payout feature are responsible for ensuring their $1 wager has been inserted into slot and the “Indicator Light” is ON. The third major rule of the poker game; Players may not exchange or communicate information regarding their hands to other players or the dealer. Player violation will result in a dead hand and forfeiture of all wagers. Another rule is; Incorrect amount of cards to the player constitutes a dead hand (or push) for that player only. The fourth rule of the game is; The decision of the table/casino supervisor is final.
If the dealer is dealt four cards of the five-card hand, the dealer shall deal an additional card to complete the hand. Any other misdeal to the dealer shall result in all hands being void and the cards shall be reshuffled. Each player shall be required to keep the five cards in full view of the dealer at all times. Once each player has examined his or her cards and placed them face down on the layout, they may not touch the cards again. The last major rule of the Caribbean stud poker game is if a hole card is exposed prior to the dealer announcing No More Bets, all hands shall be void.