Pai gow poker is an Americanized version of pai gow. The games of pai gow poker and Super Pan-9 were created by Sam Torosian and Fred Wolf. The game is played with a standard deck of 52 cards plus a single joker. It is played on a table set for six players, plus the dealer. Each player attempts to defeat the banker, who may be the casino dealer, or one of the other players at the table.

Betting positions are assigned a number from 1 to 7, starting with whichever player is acting as banker that hand, and counting counter-clockwise around the table. A number from 1 to 7 is randomly chosen (either electronically or manually with dice), then the deal begins with the corresponding position and proceeds counter-clockwise. One common way of using dice to determine the dealer starting number is to roll three six-sided dice, and then count betting spots clockwise from the first position until the number on the dice is reached. 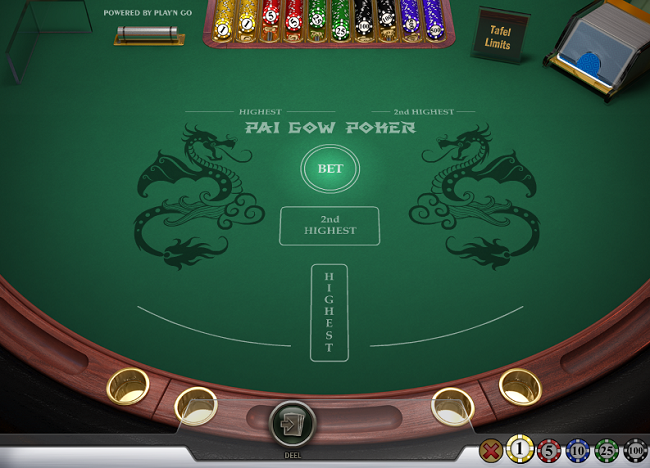 If a player is not sitting on a particular spot, the hand is still assigned, but then placed on the discard pile with the four unused cards. In some casinos, such as the Golden Nugget and Palms in Las Vegas, Nevada, an extra “dragon hand” is dealt if a seat is vacant. After all players have set their original hand they are asked in turn if they would like to place another bet to play the dragon hand. Generally the bet on the dragon hand can be the table minimum up to the amount the player bet on their original hand. The first player to accept the dragon hand receives it; this player is effectively playing two separate hands. Rules vary from casino to casino, but generally the dealer turns over the dragon hand and sets it using the house way. This is because the player has already seen 7 cards (their original hand) which could affect the way they would set the dragon hand. If each of the player’s now-separated hands beat the banker’s corresponding hand then he wins the bet. If only one of his hands beats the banker then he pushes (ties) in which case neither he nor the banker wins the bet. If both of his hands lose to the banker then he loses. On each hand, ties go to the banker this gives the banker a small advantage. If the player fouls his hand, meaning that the low hand outranks his high hand, or that there are an incorrect number of cards in each hand, there will be a penalty: either re-arrangement of the hand according to house rules or forfeiture of the hand. In casino-banked games, the banker is generally required to set his hand in a pre-specified manner, called the “house way”, so that the dealer does not have to implement any strategy in order to beat the players. When a player is banking, he is free to set the hand however he chooses; however, players have the option of “co-banking” with the house, and if this option is chosen then the player’s hand must also be set in the house way.
Californian casinos typically charge a flat fee per hand (such as 5 cents or one dollar) to play, win or lose. Other casinos take, out of the winnings, a 5% commission (usually known as the rake). While this may seem high, a hand of pai gow poker takes a long time to play compared to a game like blackjack, and there are many pushes; therefore the house doesn’t collect that 5% as often as it would collect the house percentage on other games.