Pontoon is the British or domestic version of Blackjack, which in turn is the American version of Vingt-et-un, a French gambling game popular at the court of Louis XV and later, much favoured by Napoleon, especially at St. Helena. In the twentieth century it became the most popular game of the armed forces of English-speaking nations. Pontoon, unlike casino Blackjack, has no official rules and varies widely from school to school.

What is the cardgame Pontoon?

The card game is an arithmetical game played on a table with the same layout as blackjack. In each deal, the player’s aim is to receive cards totalling more in face value than the banker’s, but not exceeding 21, otherwise he is “bust” and loses. A 21 consisting of an Ace and a card worth 10 is a pontoon, and pays extra. A player’s 21 or pontoon always beats a dealer 21 or pontoon. Like Spanish 21, it is played from either a shoe or a 4-deck continuous shuffling machine. The shoe games use six or eight Spanish decks, which are regular 52-card decks, minus the ten-spot cards. Cards Two to Nine count 2 to 9 respectively, courts 10 each, Aces 1 or 11, depending on what is better for the hand.

The game distincts from two card games, which are both blackjack variants. For people in Malaysia, Australia and Singapore, pontoon is a game similar to MatchPlay 21 or Spanish 21. A game of pontoon in the UK holds closer to the raditional BlackJack rules but can be quickly distinguished by the terms such as twist and stick. The first mentioned pontoon, the Malaysian, is played in Australian, Malaysian, British and Singaporean casinos. using multiple customized decks of cards. In Treasury Casino, Brisbane, it is known as Treasury 21. In Jupiters Casino, Gold Coast, it is known as Jupiters 21, in the Reef Casino, Cairns, it is known as Paradise Pontoon, and in Tasmania, it is known as Federal Pontoon.
The British BlackJack variant called Pontoon is played in the UK and common wealth with single 52-card decks. British Pontoon uses the terms “twist”, “stick” and “buy” and a different set of rules. The rules for buying in Pontoon include allowing the player to buy on any hand of 2 to 4 cards, allowing the player to twist after he buys. 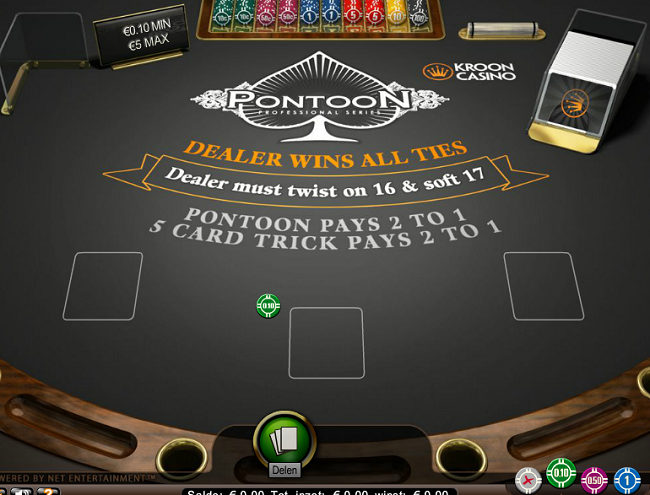 The rules of the game are quite the same as the Spanish 21 but they have some notable differences which are listed below.

• Just like in Australian, Asian, and European blackjack, the dealer has no hole card, this means that the players do not know whether or not the dealer has a natural until the end of the round, when the dealer draws his second card. Therefore, it is possible to draw to “21” and win against a dealer natural, which is player advantageous and not possible in either Spanish 21 or blackjack.
• Because the dealer has no hole card, it is possible to double and/or split and lose multiple bets to a dealer natural. All casinos, except for Adelaide Casino, offer either BB+1 or OBBO to compensate.
• An Ace in a pre-double hand is always counted as 1, rather than 1 or 11. For example, if the player doubles on soft 18, he/she is essentially doubling on 8. This rule makes doubling on soft hands highly inadvisable.
• Players are not allowed to draw on split Aces, which means that if the player splits Aces, he/she is given one card only on each Ace.
• Compared with Spanish 21, which allows splitting to four hands, there are limitations on how many hands players are allowed to split to. Casinos in Queensland and New South Wales do not permit resplitting. In most venues, players cannot resplit aces , apart from Burswood Casino, Perth, andCasino de Genting, Malaysia, where it is allowed to resplit once.
• Players can only surrender against a dealer ace or face card. If the dealer ends up with a natural, the player will still lose the entire bet; moreover, he/she missed out on the opportunity to draw to “21” and win unconditionally. This is why surrendering is a less valuable play in Pontoon than in Spanish 21.
• In Adelaide Casino and Casino de Genting, Malaysia, it is allowed to double only on two-card hands. Elsewhere, players can double on any number of cards, which is called “not last chance” doubling.
• The dealer always hits on soft 17, abbreviated as H17.
• Pontoon has the same super bonus payouts are Spanish 21, with the exception of Casino de Genting, Malaysia, which has a super bonus payout of RM1,000 on bets of RM10 to RM99, and RM5,000 on bets of RM100 or above.

The house edges for Pontoon are lower than for Spanish 21, because rule 1 is so profoundly player advantageous. The rule differences mean that there are several significant strategy differences between Spanish 21 and Pontoon.

The game of Pontoon is played using anywhere from two to eight decks of cards. The basic card values are the same as Blackjack, so aces are worth one or eleven, face cards are ten and all the other cards are worth their printed value. The best possible hand is called Pontoon and is made by an ace and any ten point card. This can be made even after splitting your hands, so it is possible to get more than one on a single hand.

The next best hand is a five-card trick, which is any five-card hand that hasn’t busted, regardless of value. After that, hands are ranked based on their point value: higher is better, as long as you stay with a score of 21 or less. Finally, all hands with 22 points or more are considered to have busted, and lose immediately for the player. At the beginning of each hand, each player is given two cards face up, while the dealer gets his cards face down. Players can always hit to receive more cards, however, they may only stand if they have at least 15 points, or if they have a five-card hand. Players can also choose to double down at any time and can choose to continue hitting after they double if they wish to do so. Once all players have finished up their hands, the dealer will reveal their cards. The dealer will draw additional cards until they have a hand of 17 or more, or until they make a five-card hand. Once the dealer’s hand is completed, all players who win will receive even money on their wagers, with the exception of players with pontoons and five-card hands, who will earn 2-1. However, all ties lose for players: they must beat the dealer in order to win the hand.

Pontoon is a very interesting variation on blackjack, and one that has a couple of features that might make it popular among those who find the original version of the game a bit daunting. As already mentioned, the strategies are a little simpler to follow, since people have fewer factors to consider on each hand. But despite the relative simplicity, the odds are just as good, and often even better, in this form of the game, with house edges of less than 0.5% frequently seen with optimal play. That’s a hard number to beat in an Internet casino, even in traditionally player-friendly games like video poker.

If a player feels ready to give this fantastic game a try, he or she can visit plenty of websites where they can start playing today. New players simply have to open a new account at any of the recommended online casinos and they are ready to jump into a game within an instance.