Red dog is a game of chance played with cards. It is a variation of in-between or acey-deucey. The deck used to play red dog is the standard, fifty-two-card variety. The game may be played with anywhere from one to eight decks, with an increasing number of decks decreasing the house edge — the house’s advantage begins at 3.155% with one deck, but falls to 2.751% when eight decks are used. This is in contrast with some other casino card games, such as blackjack, where a higher number of decks used will increase the house edge.

The game only uses three cards at a time, which are ranked as inpoker, with aces high. Suit is irrelevant. A wager is placed, and two cards are placed face up on the table, with three possible outcomes. The first possible outcome is the consecutive number, for example a four and a five or a jack and a queen. The hand of the player is a push and the player’s wager is returned. The second possible outcome is if two cards are of equal value. When this is the case, a third card will be dealt. If even this third card is of the same value the pay-out for the player will be 11:1, otherwise the hand is a push. If neither of bot options is the case, then a spread is announced which determines the payoff and a third card will be dealt. Before dealing the third card, the player has the option to double his bet. If the third card’s value falls between the first two, the player will receive a payoff according to the spread, otherwise the bet will be lost.

The spread table is as follows:

Even if eight decks are used, red dog does not offer favourable odds for the player in comparison with other games of chance common to casinos. There is little strategy involved which says raises should be made when a spread statistically favours a player. This is at seven cards or more, regardless of the number of decks used. 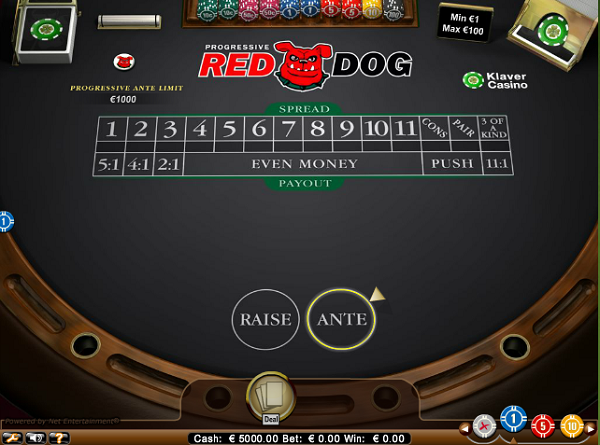